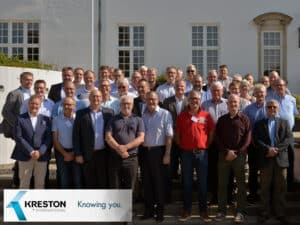 This year’s Kreston Denmark Conference was held in Helsingør, the port city in eastern Denmark famed for its 15th century Kronborg Castle, (immortalised as Elsinore in William Shakespeare’s play Hamlet).

Delegates, which included Kreston CEO Liza Robbins, were welcomed on 6th September with dinner and networking.

Commencing with the AGM, the business agenda included technical and practice management sessions which this year focused on strategies for development within the profession and technical tools and working papers. Kreston Chairman Bent Kofoed and Liza updated all on Kreston International strategy and Kreston Denmark also launched details of its new collaborative intranet platform.

Bent said:
“This was one of our best conferences to date. There was lots of energy and a great atmosphere amongst the 35 delegates. The new Kreston Denmark intranet platform was well received, and we owe our thanks to those in “Kreston Next Generation” who have worked hard on its development. I was pleased to welcome our new CEO Liza Robbins to the conference who immediately made many connections within the Danish group.”