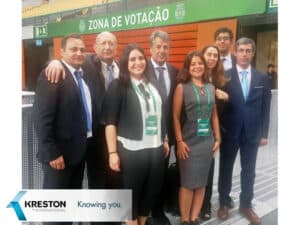 Sporting CP is one of the big three clubs in Portugal along with S.L Benfica and FC Porto and is the most successful national sports club, boasting more than 14,000 titles, 22 European Cups, 109 Olympic athletes and a series of national, European and world records. The club is currently ranked 38th in UEFA club rankings.

Kreston Iberaudit Portugal audited the process of accreditation, voting and the counting of votes.

Pictured are Partners of Kreston Iberaudit Portugal at the stadium.