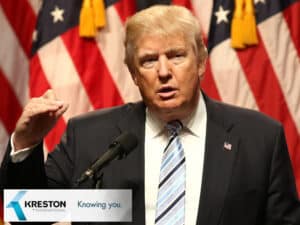 Earlier this month, the Senate voted in Donald Trump’s controversial $1.4 trillion tax reform bill by the narrow margin of 51-49. It represents the largest overhaul to America’s tax system in 31 years and is a major victory for the U.S. president. He proclaimed on Twitter:
“We are one step closer to delivering MASSIVE tax cuts for working families across America. Special thanks to @SenateMajLdr Mitch McConnell and Chairman @SenOrrinHatch for shepherding our bill through the Senate. Look forward to signing a final bill before Christmas!”

A key aspect of the bill is the reduction of the tax rate on corporate income from 35% to 20%. According to the Unified Framework for Fixing our Broken Tax Code, the rationale is to “prevent companies from shifting profits to tax havens” and limit “offshoring”. This means multinational corporations will now be able to repatriate foreign income on “high-profile returns” (such as intellectual property) back to the U.S. at a rate of 10% (12% for cash held offshore and 5% for non-cash assets). The end result is to try and substantially boost the household income of American workers.

Naturally, there are many differing opinions on what these seismic changes will actually bring. Bloomberg cites the banking, pharmaceutical, technology and fossil fuels industries as some of the potential winners. However, renewable energy companies look set to lose out. The Financial Times put it rather bluntly by saying: “If you are a global company that has made leveraged investments in U.S. renewable energy production in recent years, those assets now look like a bird that has run into a wind turbine.”

To get under the skin of these complex changes, a closer look at the current U.S. tax system is needed. As it stands, the U.S. takes a “worldwide” approach. This means that any American corporation’s profits are taxed at the same rate regardless of whether they are earned domestically or abroad. However, what must be noted is that profits made abroad aren’t taxed in the U.S. until they are “repatriated” from a foreign subsidiary to a U.S. parent company. According to Reuters, Trump’s tax reform bill promises a minimum tax rate on foreign income. It will calculate an average for all foreign earnings combined – the so-called “global minimum”.

Some analysts claim that this system has a fundamental flaw. The more an American company moves its profitable operations to countries that have tax rates of 20% or higher (often richer countries perceived as America’s economic competitors), the more it can shift profits to tax havens – without paying taxes on those profits. Ed Kleinbard, a law professor at USC and former chief of staff for Congress’s Joint Committee on Taxation, told Bloomberg, “Companies will double down on tax-planning technologies to create a stream of zero-tax income that brings their average down to that minimum rate.”

Ultimately, these tax reforms will have vast implications. Whether they will turn out to be what Donald Trump and the Republican Party envisage is still up for debate. Tax can undoubtedly be a convoluted and complex issue, and it’s in times like these that businesses need expert guidance to ensure they are complying with tax laws in the most efficient way possible.

If you have any questions on how these tax reforms may impact your business, or you would like to discuss business strategy, please contact us today.